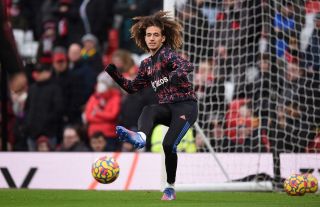 Hannibal Mejbri is on the bench for Manchester United today.

The Tunisia international was part of the matchday squad for the FA Cup defeat against Middlesbrough, but today he will be hoping to make his Premier League debut.

Ralf Rangnick has explained Mejbri’s team selection in his pre-match interview with MUTV, putting it down to Edinson Cavani’s injury, which is why the Uruguayan had to pull out of the squad.

“He was already in the squad in the cup game,” Rangnick said, as quoted by Manchester Evening News. “Since we had Edinson not available it was clear he should be part of the squad.”

The teenager caught Rangnick’s eye after impressing for Tunisia on the international stage, with the German telling ManUtd.com he was taking him into the first team on a permanent basis.

It feels like we’ll see Mejbri make an appearance at the some stage this season, and it probably helps that Amad Diallo has gone on loan, but he plays more central and is a talent we’re looking forward to seeing get more senior action.

Tunisian Football Federation sporting director Mohamed Slim Ben Othman reckons he knows where Mejbri plays best. He told The Athletic: “He can play in a lot of positions: he can be a playmaker, he can be a regista (deep-lying playmaker), he can be a defensive midfielder, he can be a winger… but for me, his best position is central midfield.

“He likes to be the player who can organise and coordinate his team. He has big physical abilities and is very selfless despite his large technical qualities.

“I see him as a central midfielder — similar to Luka Modric. He is someone with a big potential in this position and I think that even Manchester United see this and are trying to improve him as a box-to-box player. I see him like Paul Pogba in this role for his club. I hope that he will be happy in this position.”