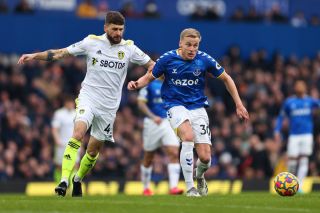 After Frank Lampard lauded Donny van de Beek’s start at Everton on Saturday, the Manchester Evening News used it to sensationalise a headline, to suggest the Netherlands international is already showing Manchester United what they’re missing.

Hmm… although Van de Beek has made an instant impact at Everton, we all know that he failed to impress two managers during his first spell at United.

He will hope to change that when he returns at the end of the season.

After an impressive first start at Goodison Park, the midfielder wasted no time in front of the home crowd, playing a big role in Everton’s opener against Leeds United.

Van de Beek continued to impress, which is exactly what he needs to do during his time at Everton to have any chance at Old Trafford.

“In a midfield two against Leeds is tough because of their movement, and because they get a lot of rotation and movement in midfield,” Lampard said after the 3-0 win, as quoted by the Manchester Evening News.

“Him (Van de Beek) and Allan were fantastic, also Donny on the ball giving us a sense of calm and intelligence, and a nice rhythm in the team, and he’s going to get better and better.

“He’s been a dream to work with in the short time he’s been here. He waited for his time at Newcastle, I thought it was right to go with the same team and show the players they deserved it with Brentford, but today was spot on.”

A great display in the heart of midfield. 💪 pic.twitter.com/lKRCGKzTaT

Van de Beek’s confidence will grow with every strong performance he puts in.