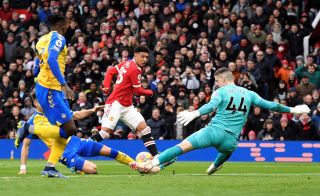 Manchester United kicked off this weekend’s Premier League agenda with the visit of Southampton to Old Trafford.

The Reds faced the all too familiar backdrop of trying to react to adversity. Underwhelming in the previous three outings, despite creating over 70 opportunities on goal, there was a feeling that a substantial performance was overdue.

The home side were unbeaten in their last 11 Premier League games against the Saints, last tasting defeat in a 1-0 home loss in January 2016. In what can only be described as the most favourable of omen, Southampton have won just 2 of their previous 22 Premier League trips to Old Trafford, suffering a 9-0 demolition in this very fixture last season.

A sharp start from United saw fluid passing, control in midfield and smooth overlaps from the marauding full-backs. The extremely impressive Jadon Sancho was looking to continue his fine form that had fans purring in recent weeks. Confidence was obvious from his movement and it would appear as though he’s beginning to feel at home in front of the Old Trafford faithful.

It only took 6 minutes for his first key contribution: a pin-point pass to the onrushing Cristiano Ronaldo, with the Portuguese rounding the keeper and opening the goal, only to see his tame effort kept out of the net.

United continued to enjoy the majority of possession, with the visitors happy to drop into a back three, sitting deep and looking to live off of counter-attacking opportunities.

Ironically, despite the control in possession, it would be United to break the deadlock through a blistering counter-attack of their own. A sensational pass from the brilliant Bruno Fernandes setting Marcus Rashford free on the right, with the Englishman bursting into the opposition box and squaring for Sancho to tap home. Vintage United and a goal up after 21 minutes.

Southampton responded brightly and started to press for an equaliser. Armstrong began getting into some good positions and had two noteworthy opportunities, forcing a fine save from David De Gea with 5 minutes remaining in the half.

Somewhat against the spell of dominance from the Saints, United broke again through Ronaldo, who squared the ball for the impressive Paul Pogba, with the Frenchman putting the ball into the back of the net. To the dismay of the home crowd, the goal was ruled out for an offside call against the Portuguese.

A scoreline of 1-0 at the half, in what was an enjoyable spectacle of football: Impressive passing, end to end action and a great view for the neutrals. United were unbeaten in 112 Premier League games when leading at halftime. The home support would hope to add to that figure.

Southampton started the second half brightly and were rewarded within minutes of the restart. Smart play down the left saw Che Adams presented with the opportunity to beat De Gea, which he did in composed fashion.

The visitors continued to press and United needed De Gea at the peak of his shot-stopping powers: The Spaniard denying Broja in the 54th minute with a fine save to force a corner.

The next 15 minutes saw both sides trade opportunities, with Southampton cutting the clearer chances. The home support grew frustrated with what appeared to be a perplexing attacking understanding from United.

United again had the ball in the net and again it was ruled out for offside. Ronaldo failed to time his run, with further frustration added to an already underwhelming afternoon for the Portuguese superstar.

Ralf Rangnick opted to push for the 2nd goal and brought on Anthony Elanga for Scott McTominay. This change saw a clear transformation in formation, with no defensive-minded midfielder remaining on the field. His objective was quite clear.

Despite the attempts, United continued to look abject in attack and almost playing as if they were individuals, as opposed to teammates. Maguire tested the visitor’s goal in the dying seconds, but Forster was more than able to deny.

The game ended a draw, despite both sides creating opportunities to win. For only the 2nd time in Premier League history, Manchester United have failed to win back-to-back matches despite leading at the half in both. The last time this occurred was in December 1998.

For Rangick, it’s back to the drawing board. His United side looks further from a team that I can remember in some time. It is a side that is bursting with individual talent and lacking in key moments of each game. United have morphed from a side that starts the game slowly, to a side that ends each game even slower. Ultimately, it’s more dropped points and more questions to be asked.