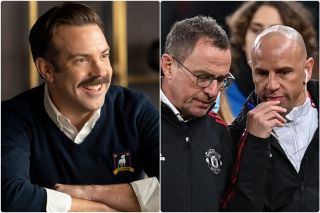 From all the leaks we’ve seen, I can tell you there has been no shortage of excuses from the players this season.

Now it has been reported that the Manchester United players are becoming frustrated with Ralf Rangnick’s methods, with a group believing his training sessions are “old fashioned”. This type of news is only story worthy when results aren’t going the team’s way, so it’s pretty timely to say the least.

But it is still something a source told ESPN, with bemusement over the fact Rangnick left a bulk of the coaching sessions to assistant Chris Armas.

Rob Dawson adds some humour to his report by stating that some players on the training ground have jokingly compared Armas to fictional coach Ted Lasso.

Lasso, for those unaware, is a hapless American who was put in charge to manage fictional side AFC Richmond in the comedy show available on Apple+.

That may seem a little harsh but this is Armas’ first job outside North America since the 49-year-old arrived as Rangnick’s number two following his dismissal by Toronto FC.

It is also noted that some players have complained among themselves that Rangnick’s sessions are often based on 11 vs 11 work rather than dynamic drills they feel help to keep them sharp between games.

Personally, I think we have too many players who fancy themselves as manager.

They need to get on with it and make sure our results improve!