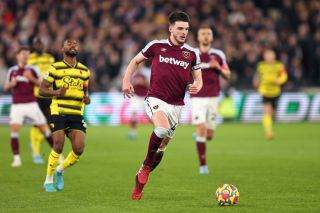 Matt Law from the Daily Telegraph has made an interesting point as to why he doesn’t think Declan Rice will cost £100 million this summer.

Manchester United and Chelsea have been heavily touted as potential destinations for the England international if he is to leave West Ham in the summer.

West Ham manager David Moyes, formerly of Manchester United, was recently quoted as saying that £100m was ‘cheap’ for a player like Rice, as per Eurosport, but some fans feel that is too much money for the Reds to pay out.

“Maybe people don’t have enough to write about. That might be where that comes from, I don’t know. But look, I can’t do anything about what people write about Declan Rice,” Moyes said.

“I can’t stop that, except say to them that you will need humongous money to get close. That’s what you would need to do. They can write all they like, but he’s here for certainly a few years.

“I said in the summer that I thought Declan Rice was £100 million. That was the sales, that was cheap, that was your chance to get Declan Rice cheap.

“When you’re 23 years old and you’re playing a number of games, there’s a lot of room for that to improve.

“If you look at the England squad in the Euros who lost in the final, it would be hard to suggest that Declan Rice hasn’t played as well as any other England player since those finals.”

Moreover, if last year is anything to go by (when Rice was kept despite telling those around him he’d like a big move), the Hammers will be tricky opposition to deal with.

And they are not going to want to do us any favours since we wouldn’t let Jesse Lingard go there on loan in January, even though he’s likely to end up there on a free in 5-months’ time.

Respected journalist Matt Law has featured on a podcast talking about Rice’s possible move away from West Ham, although he answers the question specifically from a Chelsea point of view.

“I don’t actually believe he’ll cost £100m. Sullivan and Gold will probably move on in 2023 and they’ll want to sell Rice before that because they’ll try and pocket some of that money for themselves.”

“Thomas Tuchel would love to have Declan Rice on his team.” – @Matt_Law_DT pic.twitter.com/7GcynxGmXk

Law added that he thinks £80m would be enough to prize Rice away from the Hammers this summer.

“Tuchel would love to have Declan Rice on his team,” is another important snippet from the above behind, so we can expect competition for his signature.