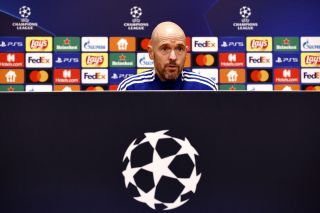 Renowned Dutch journalist Mike Verweij claims Ajax boss Erik ten Hag will be leaving his position at the end of the season.

From reading the polls and comments section on Stretty News every day, I can tell you that the vast majority of Manchester United fans are learning towards Ten Hag as the next appointment.

Personally, I think many are writing off Mauricio Pochettino to a point that raises disbelief, but Ten Hag’s work at Ajax has been extremely impressive.

It certainly looks like they are the two leading candidates to replace Ralf Rangnick.

Apparently Ten Hag’s future is in more doubt than ever before after Ajax’s former director of football Marc Overmars resigned after sending inappropriate messages to female colleagues.

That’s according to Mike Verweij, who told the Telesport podcast (cited by @TheEuropeanLad): “Erik ten Hag & Overmars were one unit together. Erik ten Hag will be gone after this season, I am quite certain of that.”

🚨 – "Erik ten Hag & Overmars were one unit together. Erik ten Hag will be gone after this season, I am quite certain of that.” [@MikeVerweij on the @telesport podcast] pic.twitter.com/RaytGwq7Ux

The Dutch reporter doesn’t add any information on United’s search for a new manager, but this could get the ball rolling.

It was previously reported that Ten Hag would not leave Ajax midway through the season, as per Football Oranje, so his loyalty to the Eredivisie club should be admired.

United’s new chief executive Richard Arnold has been tasked with appointing a new manager and he is sure to get help from John Murtough and Darren Fletcher on that front. Maybe Rangnick, too…