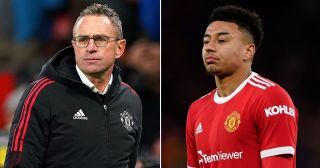 The one key common trend here is a wantaway player.

Jesse Lingard and his agent/brother made it very clear in January that they were trying to force a move out of Manchester United, despite being the player being under contract until the summer, when he will be allowed to leave on a free.

The Frenchman isn’t so fortunate to be in that strong position come the summer, but he took a pay cut to finalise a loan move to Sevilla, and United don’t risk losing him on a free in six-months’ time. He also had his agent run to the press first about his future desires.

Lingard should want to break into the team right now with our options in attack looking rather thin, rather than take extra time off.

He has refuted suggestions from Ralf Rangnick on his situation at the club.

In his press conference ahead of tomorrow’s FA Cup encounter against Middlesbrough, the German stated that Lingard asked for some time off due to ‘personal reasons’, but Lingard has claimed that this was advised by the club – not himself.

Lingard tweeted: “The club advised me to have time off due to personal reasons! But my headspace is clear and I’ll always be professional when called upon and give 100 percent.”

The club advised me to have time off due to personal reasons! But my headspace is clear and I’ll always be professional when called upon and give 100 percent

Apparently his ‘headspace is clear’, so why then would he take the extra time off, even if offered? It sounds like he’s making a mountain out of a molehill.

Anyone else bored of this already?