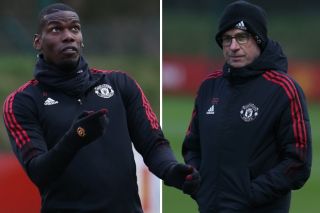 Manchester United take on Middlesbrough in the FA Cup on Friday night so we are taking a look at what players could return from injury after the international break.

The Reds haven’t kicked a ball since Saturday, January 22 when they beat West Ham at Old Trafford. Ralf Rangnick will hope his side can stick to winning ways by processing in the cup.

Paul Pogba is one player the press will be asking Rangnick about at tomorrow’s press conference, which we will be covering at Stretty News, after being pictured training with the first team again this week. The France international has been out of action since November and February has been earmarked as the month for his return.

Rangnick recently said (via ManUtd.com): “Hopefully after the international break, when we have the cup game against Middlesbrough and the away game at Burnley, I think he could be an option.”

One player who we’ve not seen since the last round of the FA Cup is Luke Shaw. It is hopeful that the international break allowed him time to recuperate, especially with Alex Telles playing for Brazil last night (he’s unlikely to feature along with Fred).

Meanwhile, Aaron Wan-Bissaka is expected to return to full training this month. The manager has been coy on his absence from recent matches, though it’s believed an illness kept him out of action.