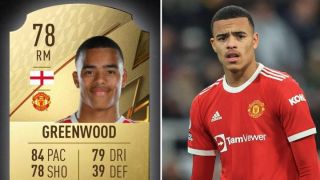 Some of Manchester United’s players, including David de Gea, Cristiano Ronaldo and Paul Pogba have unfollowed Mason Greenwood on Instagram in the wake of rape and assault allegations.

Now the Manchester United academy graduate has been removed from the popular computer game FIFA 22. Greenwood no longer appears in the game after a database update from all platforms.

EA Sports has released a statement confirming Greenwood’s suspension from the game.

“Mason Greenwood has been removed from active squads in FIFA 22 and has also been suspended from appearing in FIFA Ultimate Team (FUT) packs and Ultimate Draft,” an EA Sports spokesperson told Manchester Evening News.

Greenwood, 20, was arrested on suspicion of rape and assault on Sunday, after images and videos were posted online by a young woman.

He remains in custody and under questioning by the Greater Manchester Police, who have not named the player in any of their statements, with more time being granted to interview the suspect.

Greenwood will not train or play for Manchester United until further notice.

That means Ralf Rangnick will have to plan on without Greenwood and that could make way for more youth players pushing through.