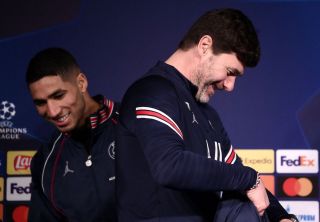 Manchester United are confident of appointing Mauricio Pochettino as Richard Arnold looks to step up the managerial appointment process.

According to The Mirror, former Tottenham Hotspur boss Pochettino, currently in charge at Paris Saint-Germain, finally looks likely to take over at Old Trafford after years of speculation.

They claim sources in France have suggested PSG have already made a decision to part ways with Pochettino at the end of the season, following a shock cup exit against Nice during the week.

That would lead the way for United to appoint the 49-year-old but they will hope he can come to Old Trafford with a title under his belt. PSG are currently 11 points clear at the top of Ligue 1 and in the last 16 of the Champions League.

Zinedine Zidane has been linked with the PSG job again, adding pressure to Pochettino ahead of their Champions League clash against Carlo Ancelotti’s Real Madrid.

One would hope Pochettino isn’t sacked on the spot if the French giants crash out of Europe at such an early stage of the Champions League.

It has been long documented that Ed Woodward was a fan of Pochettino and the Mirror believe his successor, Richard Arnold, the club’s new chief executive, is keen on making the Argentine his first appointment – to replace interim manager Ralf Rangnick.

The report states that Ajax boss Erik ten Hag is another name under consideration at the club.