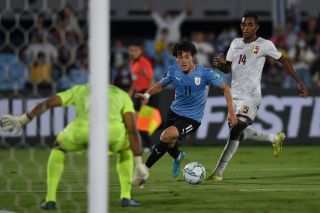 Uruguay boosted their chances of qualifying of qualifying for Qatar 2022 with a 4-1 win over Venezuela in the early hours of the morning.

I was watching closely after Uruguay announced Manchester United duo Edinson Cavani and Facundo Pellistri would start the game in attack, which offered up a late-night surprise of football action.

United loanee Pellistri, currently at Alaves in La Liga, stole the show on only his second appearance for Uruguay as the 2-time World Cup winners increased their chances of reaching Qatar 2022 by making their Venezuelan task look easy.

And if it wasn’t for Pellistri winning a foul inside the box, former Liverpool man Suarez wouldn’t have scored his 66th international goal. A brilliant run set up the second goal and his trickery won the penalty.

The three points takes them into fourth spot in the table, three points adrift of third place, and with two qualifiers left at home to Peru and away to Chile, Uruguay’s World Cup destiny remains in their own hands. You should check Indiana online sports betting for the best odds on outright selections such as the World Cup and qualifying stages.

Part of me is gunning for them now if it means we’ll get to see more of Pellistri, who has yet to get a run of games in United’s first team, but this experience will do him good and show the next United manager that he’s got international talent on the fringes of the squad.

More positivity for the Reds in South America

Alex Telles started at left-back for Brazil in their convincing 4-0 win over Paraguay, stretching their unbeaten run in the qualifying stages to 15 matches. Fred was rested as an unused substitute for the game as Brazil have already qualified for the finals in Qatar later this year.

Brazil legend Roberto Carlos took time on Instagram to congratulate Telles after making his first competitive start on the international. The 29-year-old played the full 90 minutes after Alex Sandro tested positive for COVID-19.

It was Telles’ second start for Brazil, however, after his first came in a friendly against Panama three years ago.

At least we’ll have a few United players from around the continent playing at the World Cup, which is the way it should be.