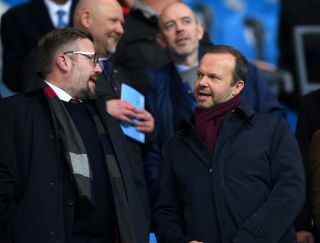 Manchester United’s parasitic American owners (they don’t deserve their names written) are once again playing a dangerous game and skating on thin ice if they are to receive their precious Champions League megabucks come what May.

The Arsene Wenger trophy, previously known as the top four, is by no means a guarantee for United now an admittedly bloated squad, the majority of whom were given false promises of game time by Ole Gunnar Solskjaer, has somehow become weaker with the dealings done in January. By dealings, I mean exits only. If the unthinkable happens, will the man who has almost singlehandedly kept us in the Champions League Cristiano Ronaldo want to stick around? Europa, hell even Conference League Varane sounds nauseating and doesn’t have the same ring. Will United be able to attract the same level of player?

Ralf Rangnick had reportedly already identified targets for the winter window virtually as soon as he stepped through the doors at Old Trafford, as early as late November Amadou Haidara was name-dropped as a key target to implement the gegenpressing style Rangnick is famed for. Logically, if the club don’t intend, as expected, to make Rangnick the permanent manager in the summer huge deals should not have been expected but Haidara, at a reported £33m transfer fee wouldn’t have cost the earth.

There were deals to be had in the neglected CDM position, another apparent Ralf favourite Denis Zakaria signed for Juventus for only £4.5m, the versatile Boubacar Kamara of Marseille was turned down for a small fee. It was yet another dereliction of duty from the bozos running our once esteemed football club, now business. I understand those players may not be to the liking of the next manager, but for relative pennies if they don’t work out, it is no great loss and you move them on. Supposedly the scouts were not keen on Zakaria, were these the same scouts who deemed Donny van de Beek not physical enough for the English game but proceed to sign him anyway? It makes you wonder what advisory role Rangnick was promised when taking the interim manager role and just how much say he will have come the summer.

With Donny gone until the summer, United are now a McFred injury away from Nemanja Matic, whose legs went three years ago and can’t play two games a week. How has it got to Manchester United in 2022 being a few injuries away from Juan Mata (another who is well past his best), Matic and Phil Jones, who has made a grand total of two starts since January 2020 in the starting XI? Jones, by the way, shunned a loan move to Bordeaux over concerns about game time. Am I missing something or should he not be grateful for any minutes and a fresh start? How can he be thinking that way when his chances at United are bleak at best?

Hindsight is a wonderful thing, but the writing was on the wall when the parasitic American owners (again I refuse to honour their names) took another £11m in dividends in early January, god forbid a disjointed, fractious squad be strengthened when those beneath and clubs as low as Newcastle United show actual ambition for a successful football side. It will come as a shock to them, but everyone can see if you sleepwalk and your rivals take forward steps, they eventually overtake you.

If you don’t give a manager the tools he needs, how can you expect them to deliver their best? Rangnick was happy to let Jesse Lingard leave but now has a disillusioned player, another who has been messed around since Ole promised him minutes last summer, loitering around the place for 6 months before he inevitably leaves on a free. Why have we kept him and/or subsequently not replaced him? Did we play hardball with Newcastle after the £50m Sean Longstaff debacle? Are we punishing Lingard for not signing a new contract? Have we kept him because of the Greenwood incident? No wonder the dressing room is fractious when the likes of Lingard and Pogba are just waiting for their next club, what message does that send out?Will they be fully committed?

The new manager will have a thankless task come the summer, so many players’ futures will be up in the air- Henderson, Bailly, Jones, Matic, Mata, Pogba, Lingard, Cavani, Amad, Martial, van de Beek, hell even Ronaldo, Varane and Fernandes if United falter, as is distinctly possible now, towards the end of the season. It is absolutely gut wrenching and beggars belief that United need yet another rebuild and more hundreds of millions chucked at it when we went down this path fruitlessly with Solskjaer.

The scale of this United job should no longer be underestimated. This has potential to become a Liverpool esque rot and Ralf Rangnick’s job in the immediate has become that much more harder with the latest instalment of United’s transfer failings.

This was Ed Woodward’s last dance, so of course it ended in failure for Manchester United.

One response to “Opinion: January transfer window was Ed Woodward’s Last Dance, so of course it ended in failure for United”