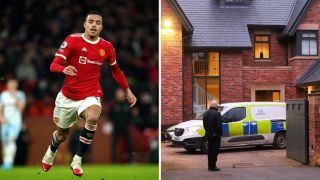 Detectives investigating the rape and assault of a woman have been given more time to question Manchester United footballer Mason Greenwood.

The 20-year-old was arrested on Sunday afternoon following social media images and videos posted online by the young woman in question.

Greenwood has been held in custody by the Greater Manchester Police, who have not named the player in any of their statements, and they said detectives have now been given more time to question the suspect.

The GMP said in a statement, as per BBC Sport: “Detectives have been granted additional time to speak to a man in his 20s who is being held on suspicion of rape and assault of a woman.

“Inquiries are ongoing, and the victim is being offered specialist support.

“We remind people to avoid any commentary or sharing of images that could compromise the victim’s right to lifelong anonymity, or risk prejudicing a live investigation with active proceedings.”

The images and allegations were made public on Sunday morning via the woman’s Instagram account, which her father claims was hacked. The posts have since been deleted but they’ve done the rounds across social media.

We’ll be keeping you up to date with more developments in duo course.