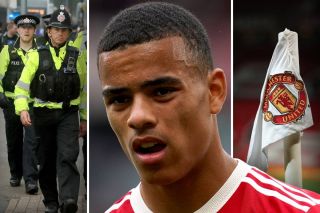 Nike is “deeply concerned” by allegations made against Mason Greenwood.

The Manchester United footballer’s boot sponsor has issued an updated statement after the England international was accused of attacking a woman.

Distressing photographs and videos did the rounds on social media on Sunday morning, which led to United’s decision to suspend the player from training and matches until further notice.

“Mason Greenwood will not return to training or play matches until further notice,” a statement from Manchester United read.

However, we now know that Nike have joined United by suspending their deal with Greenwood, with the sportswear company releasing a statement this evening: “We have suspended our relationship with Mason Greenwood. We are deeply concerned by the disturbing allegations and will continue to closely monitor the situation.”

Greenwood is set to spend a second night in a cell after Greater Manchester Police were granted additional time to question the player over the allegations.

Nike became concerned when a series of photos and audio files were released on Sunday morning. They were extremely graphic and the police are now dealing with it.

They have been Greenwood’s sponsor for a few years and would have considered him a valuable asset not long ago.