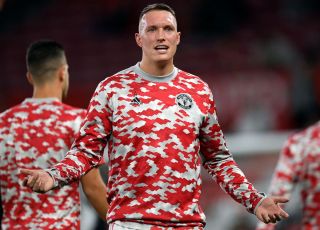 Queue the jokes about Manchester United never getting rid of Phil Jones.

You have to feel sorry for Phil Jones.

To be tipped with a move away to Bordeaux; only for that to quickly diminish due to concerns over the playing time the defender would recieve at the struggling Ligue 1 outfit.

It wasn’t supposed to be like this when Jones burst onto the scene at Blackburn Rovers and quickly prompted Sir Alex Ferguson to sign him as a future first team player at United.

Injuries have seen his career nosedive and Jones could be stuck at United for another six months while getting little to no game time.

Part of me wonders that surely he’d get more opportunities with Bordeaux than he does currently at United?

According to James Ducker of the Telegraph, Jones has turned down the chance of a loan to Bordeaux, meaning he will stay at United unless another club shows interest on deadline day.

Ducker tweeted: “Phil Jones has turned down the chance of a loan to Bordeaux.”

Phil Jones has made less than a handful of appearances over the past two years at Manchester United. And, if he was to stay fit for the remainder of the season at Bordeaux, he’d likely make double that for them before Ligue 1 finishes up.

Bordeaux are battling against relegation this season and they could do with his experience, but maybe Jones doesn’t feel that the manager is looking for a player of his ilk.

An experienced footballer is not going to move somewhere on loan unless he believes he’s going to play football. But why would a club should an interest in a player they don’t plan to play? It all sounds very Donny van de Beek to me!

The fact Jones turned down a move to France, without further explanation, makes me think he could have been tipped off about a new offer from elsewhere.

Only time will tell. Buckle up for transfer deadline day with Stretty News.