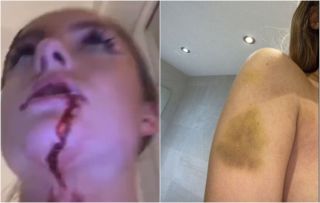 Mason Greenwood finds himself in the middle of a domestic violence storm after being accused of beating his girlfriend Harriet Robson.

Throughout the morning, pictures and videos were put out on Harriet’s Instagram account showing all the bruising and cuts on her body with a caption stating: “To everyone who wants to know what Mason Greenwood actually does to me.”

She also posted an audio clip in which Greenwood was being abusive with threatening behaviour.

The news has shocked Manchester United fans this morning. Moreover, the club has already issued a statement which clearly reads that they won’t condone domestic violence.

For a player who had such a bright future in front of him, now nobody has the slightest idea of what the future will hold for Greenwood but people are bound to think very differently about him.

He will need to give his side of the story, too, and we wouldn’t be surprised if a statement came at some point this evening because this story has blown up in the media.

You can seen a screen recording below containing the audio that was uploaded to Harriet’s Instagram (warning: some viewers may find this content distressing):

Harriet Robson just posted this voice note on her story. Mason greenwood is finished, what a vile fucking creature. @ManUtd get rid of him. pic.twitter.com/XI2U6DIAAj