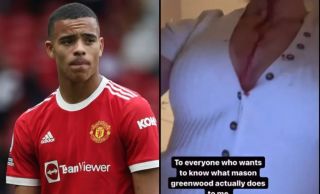 WARNING – DISTRESSING CONTENT: Harriet Robson has shared a series of Instagram posts that she claims show the effects of the physical abuse suffered by her at the hands of Manchester United star Mason Greenwood.

The social media influencer uploaded a number of pictures and videos to social media, including one with a cut lip and several bruises to her face, body and thighs.

A caption reads: “To everyone who wants to know what Mason Greenwood actually does to me.”

A damaging audio file is also doing the rounds.

United have issued a statement after allegations emerged against Greenwood.

The club claims to be aware of “images and allegations circulating on social media” regarding the 20-year-old forward, who has a lot of answering to do.

A spokesperson for United said they “did not condone violence of any kind” but would not make further comment “until the facts have been established”.

The club’s statement read (via MEN): “We are aware of images and allegations circulating on social media.

“We will not many any further comment until the facts have been established. Manchester United does not condone violence of any kind.”

This could all put Greenwood’s career in major doubt after seeing him become a first-team regular at Old Trafford over the last few years, scoring 35 goals in 129 appearances across all competitions.

Robson’s evidence is enough to turn our stomachs, but it’s hard to really have an opinion on any of this stuff until the facts are released.

It looks terrible for Greenwood and we can only say he deserves the backlash (and more) if it’s true.