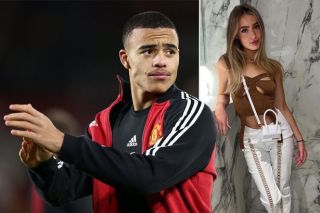 Harriet Robson’s father has given an exclusive interview to the Daily Mail just hours after photographic and audio evidence went public alleging that his daughter had been physically and verbally abused by Manchester United star Mason Greenwood.

The club has already decided to suspend Greenwood from training and matches until further notice, and the Greater Manchester Police are also looking into the abuse allegations.

Journalists at the Mail were obviously busy this morning, seeking comment from family members of Harriet, after photos showed her bloodied face and bruised thighs as well as upper arm. An equally disturbing screen recording were viral, too, including an audio clip of a distressing conversation believed to have been held between the pair.

This must be a very difficult time for Mr Robson, who gave his first public comments on the situation to MailOnline, saying: ‘The first thing we knew about this was at 6am this morning. It is dreadful. I’m just coming to terms with it all.

‘As a father you don’t want to know things like that happening to your daughter. The police have been round and she has made a statement to them.

‘She has told us her phone has been hacked. We told her to take it down, which she has done but it’s out there now so it is too late.

‘She is devastated because she didn’t want it released. We have known him since the under 21s. He has been part of our family for two or three years.

‘Their relationship has not been good for the last few months. She is completely devastated by it all.

‘They were very much in love and have been together for a while. The police are dealing with it now.’

We wholeheartedly stand by United’s decision to suspend Greenwood until further notice.

This disappointing news has shocked the entire football community and we will wait on further updates before adding comment.