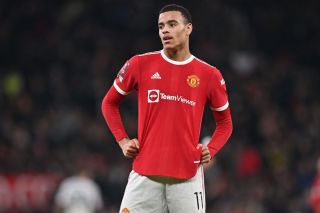 The United and England forward hit the headlines this morning for all the wrong reasons after Robson posted several images of her body battered. They now act as strong forms of evidence against the United youngster as it looks like his has a track record for physically abusing his partner.

A statement from the club this morning read: “Manchester United does not condone violence of any kind.”

Rather worryingly, Robson also included a voice recording of a separate incident involving Greenwood, which requires a content warning before viewing.

The GMP have said the following in a statement (via Mike Keegan): “Greater Manchester Police is aware of images and videos circulating on social media. Enquiries are ongoing to establish the full circumstances.”

From a Manchester United perspective, I am absolutely disgusted by everything I have seen on this story throughout the morning. It’s difficult to comment on any situation without knowing all of the details and I’m sure we will find out more over the coming days, but we do not condone domestic violence.

It appears that Greenwood is now being investigated by the GMP, so interim manager Ralf Rangnick has even more work on his hands, considering that Greenwood has played regularly since arriving at Old Trafford.