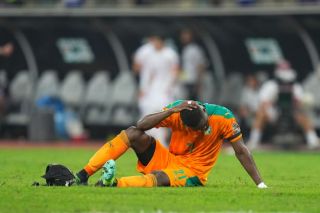 No offence to Bailly, we love his rash ways at Stretty News, but the last thing you want to see in a penalty shoot-out is one of your defenders or goalkeeper standing up to take one.

Unfortunately, the Manchester United defender was the only player from both sides to miss a penalty in the AFCON round-of-16 clash against Egypt, and, to make matters worse, Liverpool star Mohamed Sarah scored the match-winning penalty.

Bailly’s effort was saved by Mohamed About Gabai.

It's unconventional… and it hasn't worked.

Nah why is Bailly attempting a no look during a penalty shoot out 😭😭😭 he's too funny man pic.twitter.com/XUmBsRQgdS

What was he thinking with the no-look effort, though? This wasn’t a friendly 5-aside match with his mates. It was a chance to reach the quarter-finals of the African Cup of Nations!

It also limited his run to one-step before taking his spot-kick.

We highly doubt the manager was happy with him after the match.