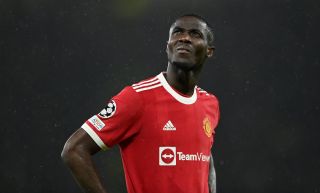 Eric Bailly has been linked with a move to AC Milan this month, with more rumours suggesting AS Roma could also be interested in signing the Manchester United centre-back.

The defender didn’t have the best of weeks after his failed spot-kick against Egypt saw Ivory Coast crash out of the African Cup of Nations. He attempted a no-look penalty before the goalkeeper correctly guessed the direction of the ball.

Recent reports have linked the 27-year-old with a move away from Old Trafford; with Raphael Varane, Victor Lindelof and Harry Maguire all ahead of him in the defensive pecking order.

But fresh claims from Jonathan Shrager suggest Bailly won’t be going anywhere on loan this month.

Shrager, formerly of Stretty News TV, tweeted the following this evening: “I am told that Bailly will not be leaving United on loan this month.”

That means any interested club would have to offer an acceptable transfer sum in order to sign Bailly before the January transfer window shuts.

Keeping hold of Bailly wouldn’t be a bad idea because United are currently one or two defensive injuries away from a crisis at the back. The only other option is Phil Jones and we’re surprised that he failed to get a move away from the club this month.

Interim manager Ralf Rangnick has addressed the team’s problems at the back and we are not leaking as many goals as before, but there is still room for improvement.