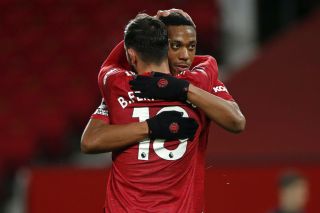 Manchester United midfielder Bruno Fernandes has sent a heartfelt message of farewell to teammate Anthony Martial, who recently joined Spanish side Sevilla on loan until the end of the season.

Fernandes and Martial have played together since the Portuguese creator joined the club two years ago.

Despite Fernandes’ time in Manchester being hugely successful following 47 goals and 36 assists in just 108 appearances, in all competitions, unfortunately, the same cannot be said for Martial.

Having endured an abysmal run of form, this January sees the Frenchman handed an opportunity to reignite his career by way of La Liga.

Wishing him good luck in his next chapter, Fernandes has sent the United winger a message of support.