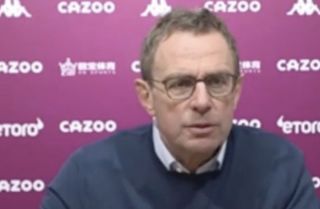 After throwing away a two nill lead, interim manager Ralf Rangnick was forced to settle for just the one point.

One of the game’s biggest talking points came before kick-off when it was confirmed that star striker Cristiano Ronaldo was not among the German’s matchday squad.

Speaking to reporters after the match, Rangnick explained that the Portuguese megastar is suffering from a hip flexor injury but admitted to being hopeful he could return in time for the side’s next match against Brentford on Wednesday.

“He [Ronaldo] was injured,” Rangnick said. “He still has problems with his hip flexor and that’s why he couldn’t train yesterday.

“I spoke to him before and after the training session and we decided that it makes no sense to just travel without knowing if he could really play.

“So we will see what the situation is like tomorrow and if he will be available again on Wednesday.”