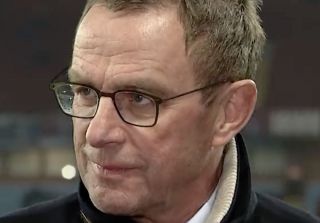 Manchester United is preparing to face Steven Gerrard’s Aston Villa for the second time this week.

The Red Devils, who beat the Villians 1-0 in Monday evening’s FA Cup Third Round tie at Old Trafford, will be hoping they can secure another victory – this time in the Premier League.

Ahead of what is expected to be another fiery encounter, German manager Ralf Rangnick has named his United starting lineup.

Notable absentees include attacking duo Marcus Rashford and Cristiano Ronaldo with the latter also missing out earlier in the week.

Revealing the reasons behind both players’ exclusion, Rangnick, who spoke pre-match, said: “With Cristiano, unfortunately, it is still the same problem. […] He isn’t fully fit to make the trip here. […] Marcus had a dead leg two days ago in training.

“At first it didn’t seem to be that bad but overnight it got worse and he couldn’t train yesterday.”