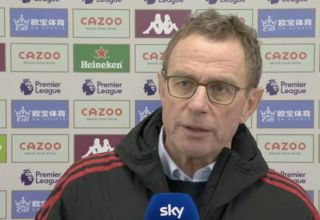 The Red Devils, who travelled to Villa Park, would have been desperate to take all three points as they continue to challenge for Champions League qualification.

However, despite beating Steven Gerrard’s Villians 1-0 in Monday’s FA Cup Third Round tie, United failed to make it two wins from two after throwing away a two-goal lead.

Reacting to his side’s latest poor showing, Rangnick felt the team played well in spells but admitted it is tough to pick out many positives overall.

🗣 “We had spells where I felt it was our best game since I came here.”

Ralf Rangnick takes positives from spells in the game but knows there are still areas of improvement pic.twitter.com/v1xb39bxHY