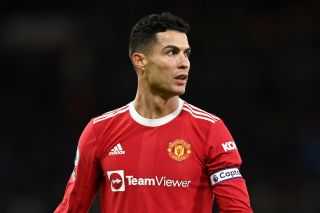 Cristiano Ronaldo was forced to leave Manchester United training early on Thursday after he suffered an injury, according to reports.

Ronaldo returned to Old Trafford this season and has been a key figure. That’s why it struck a chord when he spoke out this week about dressing room’s mindset and how finishing out of the top 3 is failure for a club like Manchester United.

And, if there is a player in the squad who can take up into the top four come the season’s end, it’s CR7.

However, Ronaldo looks set to miss the weekend trip to Villa Park with a thigh injury, as per The Sun. The report claims the Portugal international was unable to complete Thursday’s training session and was sent home early to recover.

This makes Ronaldo a major doubt for Saturday’s game against Aston Villa. He missed the cup tie against Villa on Monday night, when United progressed to the next round of the FA Cup.

We are expecting Ralf Rangnick to address these concerns at his press conference later today.

Is it time for Edinson Cavani to lead the line?