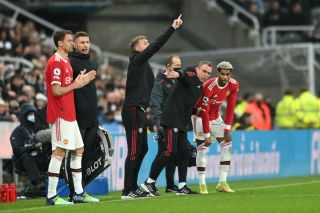 Manchester United have not become the pressing team many expected when Ralf Rangnick arrived at Old Trafford as interim manager. It could still take time, but the German ‘Professor’ only has six months as manager before moving into a consultancy role upstairs at board level.

At his press conference on Friday, Rangnick said United must become a consistent pressing side if they want to compete for the Premier League title, which is what every fan wants to see.

Sadly, it’s too late to mount a challenge this season as we’re too far behind Man City (22 points), but it needs to be an objective for the near future. It feels like this club has wasted too many years in recent history (post-Ferguson).

United are set to go nine years without a title and we don’t want the wait to be much longer.

While the Reds excelled at pressing for 30 minutes of Rangnick’s first match in charge against Crystal Palace, but the performances after that have been atrocious. They’ve all lacked intensity, high pressing and the basics of football like 5-yard passes and moving into dangerous areas to make space.

“This is the only way we can compete in this league and at that level,” Rangnick stressed to reporters, as per Manchester Evening News. “Whenever you watch games, even if it’s not the top teams, they play with intensity, they play with physicality, they play with energy and they sprint. This is what we have to do. We have to develop into this kind of team.

“As I said after the first game against Crystal Palace, we showed at least in the first-half a lot of those things and it’s about implementing this into the team in a sustainable way. This is our job.

“We have to do it together with the players and we have, obviously, to develop the players, identify for each game, the players who are willing and able to do that and to deliver exactly what we spoke about.”

Today it’s about the FA Cup and we will be hoping to see United knock Aston Villa out in the third round. At least that is a competition I can see United winning this season.