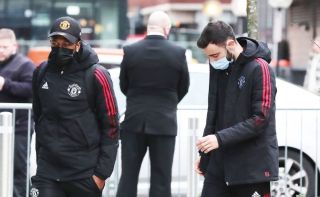 Victor Lindelof is set to make his first appearance in a month after missing Manchester United’s last three matches due to COVID-19.

Although club captain Harry Maguire was pictured in training, it doesn’t look like the centre-back arrived at the Hyatt hotel in Manchester on Monday afternoon. That is where the first team is based ahead of tonight’s FA Cup third round clash against Aston Villa.

The Manchester Evening News had photographers at the hotel, and they did not spot any of the following players: Jadon Sancho, Cristiano Ronaldo, Dean Henderson, Anthony Martial and Phil Jones.

However, the report does note that these players could still be playing and travelling separately to the ground – or maybe the team hotel at a later time.

It could be a chance for Amad to get some minutes under his belt before leaving the club this month on loan, though his loan switch to Birmingham City has collapsed.

Check out our predicted XI to face Aston Villa.

Paul Pogba is still out injured.