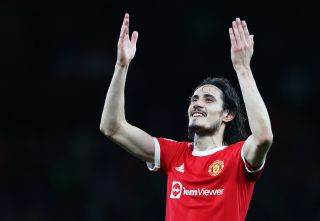 Manchester United interim manager Ralf Rangnick has confirmed that Edinson Cavani will be staying at the club in January rather than seek a move elsewhere.

It has been reported that some clubs, including Barcelona (via Sport), are very interested in signing the striker and that he could be tempted to make a mid-season move.

There has also been rumours over unrest in the dressing room, with Cavani said to be one of the players unhappy at the club. And with just six months left on his contract, an exit didn’t feel completely out of the question.

On Friday, Rangnick said that he was not prepared to sell the 34-year-old striker and sees him as being crucial to his plans this season.

Cavani has already expressed his wishes to stay during a meeting with Rangnick.

The manager spoke to reporters at Friday’s press conference, saying (via Goal): “I told him that if it was up to me I would want him to stay and I had a conversation with him yesterday.

“He came into my office and we spoke for almost half an hour and he told me he will definitely stay and would want to stay until the end of the season.

“Not only because I told him that he should stay or has to stay, he did it on his own behalf and he told me that I can rely on him to stay until the end of the season and give his very best and be a role model for the young players.

Fans will be delighted to hear that Cavani is committed to the cause.

It will be interesting to see if he starts tonight’s FA Cup third round tie against Aston Villa.

The King of Uruguay has scored 12 goals in the Premier League since joining United.