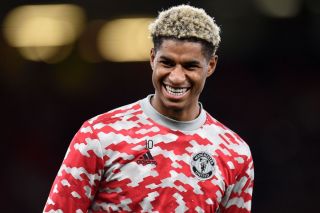 Manchester United forward Marcus Rashford has rubbished reports that he is unhappy at Old Trafford, a day after Fred labeled the claims ‘fake news’.

Fred hit out at recent claims in the media on Friday with a Twitter post and Rashford has now done the same.

The Reds have endured a difficult campaign despite being tipped as title challengers before it all kicked off, but Ole Gunnar Solskjaer was sacked in November and the club has since turned to Ralf Rangnick on a temporary basis.

After losing to Wolves last time out, United remain in seventh place in the Premier League but they need to find winning form if we’ve any chance of climbing back up the table.

According to the Daily Mail, 17 players are fed up with life at United, with as many as 11 players actively looking to quit.

While we could easily name a few of the unhappy ones, Rashford has publicly stated that his name shouldn’t be dragged into it.

Rashford has hit out at the reports and insists is isn’t ‘unhappy’ at the club.

The United forward wrote: “I read something earlier that said I’d been quiet on here but what can I say that will make this better other than showing you all on the pitch? We’ve all been disappointed with recent performances and we’ve been as disappointed with the news coverage questioning our commitment to not only the manager and the coaching staff but the club. I have endless respect for both and I’m looking forward to bettering my game under the staff at Manchester United. I’m not sulking, I’m not unhappy, am I disappointed in some of my recent performances? Of course I am. I’m my own biggest critic. It’s been a tough start but I’m determined to prove my worth. My dedication and my desire to be here should never been in question. I love this club.”