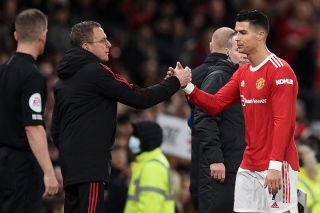 There has been a lot written about dressing room unrest at Manchester United this week.

From 11 players wanting to quit the club to Cristiano Ronaldo threatening to leave if he doesn’t like the next manager, there has been no shortage of drama reported within United.

It’s non-stop for someone who covers the club every day of the week. Early shifts become night shifts more often than not, but we love it. It’s Manchester United.

Obviously, we don’t like the negativity or hearing about whinge-bag players showing disrespect to their manager, who has not been in the job very long.

Rangnick was late for his press conference today as he wanted to change his clothes after getting caught out in the Manchester rain.

He initially told the reporters (as per Manchester Evening News): “I can only tell you about the squad, locker room, coaching staff. Everybody was very disappointed not only about result [vs Wolves] but also performance. We have four days of training before Aston Villa, my job is to make sure we show a different performance.”

It’s always a relief to hear the manager take responsibility after a poor result. Rangnick does that but also urges the players to kick on and defending them by saying they’re trying to follow his advice at the very least.

Rangnick was also asked more specifically about the his dealing with this sensitive squad, adding: “This is not only an issue with a club like Manchester United. When you have a big squad, in the last two games, we had most of the players available.

“We had three centre-backs missing against Wolves. In general, we had most of the players available, apart from Paul Pogba and 10 few players can play, three subbed, then you have quite a number of players who don’t even play or not even in the squad.

“Those players are unhappy about the situation, it’s obvious, clear. I tend to explain to players every two or three weeks why they are not playing and that is an issue in our team and other clubs.”

He added: “We have players with contracts expiring in the summer. We also have one or two more people who want to leave and are under contract. It’s about the players dealing with that in a professional way, showing up in training, showing up, getting a chance to play. If this is not the case, the player, club, and agents need to discuss the situation. I cannot say to anyone else. I will address that to the players directly.”