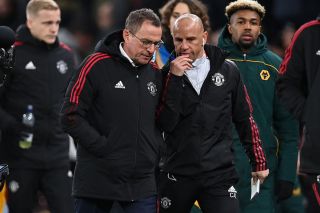 Manchester United interim manager Ralf Rangnick showed up late for today’s press conference. There was a delay because he wanted to get changed after getting caught out in the Manchester rain.

There has been some uncertainty over whether the United players are taking Rangnick’s demands on board. The German talks about how he likes his teams to press with high intensity, but United fans are not stupid and they can see what is put in front of them.

We’ve not seen an improvement in performance since he took charge and now there are reports of approximately 11 players who want to leave United after becoming disillusioned with life at the club.

This has raised alarm bells within the fan base because it shows how petty some of our footballers are, amid a dire situation for the club.

After all, it is the fans who feel most pain after bad performances and results.

Rangnick was asked whether he felt the players were buying into his ways.

“They are at least trying,” Rangnick told reporters, as per the Manchester Evening News. “I am sure they are listening. I think we showed in the last games that they’re trying to follow the advice we give. We conceded less goals than before. But it is about balance between offence and defence.”

They need to try harder.

Rangnick also needs to discover which players are willing to work for him and take their opportunity in the team. I thought we would’ve seen more of Donny van de Beek, but it sounds like the new boss has come to the same conclusion as Ole Gunnar Solskjaer, with The Athletic sugggesting he struggles to cover enough ground in training.

United need to gather themselves and go on a winning run to resurrect our season.