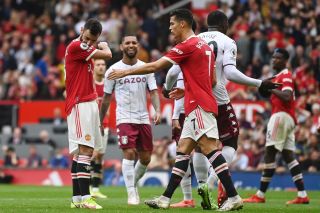 Manchester United will be looking to progress to the fourth round of the FA Cup when they take on Aston Villa at Old Trafford on Monday night.

The Reds go into the game on the back of a bitterly disappointing 1-0 home defeat to Wolves in the Premier League, whilst the visitors were defeated 2-1 by Brentford.

Interim boss Ralf Rangnick is widely expected to make some changes to his starting eleven to face Aston Villa, with Donny Van De Beek, Juan Mata and Marcus Rashford all pushing for starts.

Having not won a trophy since winning the Europa League back in 2017, the Reds are desperate to get some silverware on board and the FA Cup arguably represents the clubs best chance of winning a trophy this season.

The FA Cup may not be top of everybody priority list but, with only top four to play for in the Premier League and the European Cup looking a mighty tough ask, winning the FA Cup would get the club back in the habit of winning trophies again, which is why it’s so important Rangnick takes Monday’s game seriously.

Aston Villa are no mugs and having already lost to them at Old Trafford earlier in the season, United will be fully aware just how difficult they can be on their day.

Should Rangnick decide to chop and change his starting eleven too much, then United could quite easily go out of the competition here.

The start to 2022 hasn’t been great for United but by beating Villa and progressing to the fourth round of the FA Cup, it would help lift morale at Old Trafford and put a welcome smile back in reds faces following the defeat to Wolves.

It’s a game United dare not lose should they wish to turn their season around and one which I do think they will win albeit it will be close.