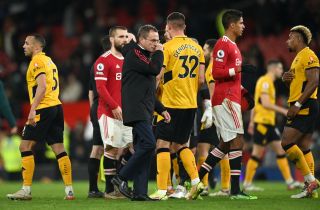 It would be churlish to suggest that a man of Ralf Rangnick’s intelligence and football experience hadn’t understood the scale of the problems he was to inherit when Manchester United anointed him the interim manager for (at least) the remainder of the 2021/22 season.

But one month and 6 games into his tenure, even he must be alarmed at the extent of the malaise the club finds itself in. On the pitch the same old problems persist. 45 minutes against Crystal Palace aside, very little seems to have changed in terms of performance levels. The positivity and hope for renewal that Rangnick brought with him is quickly dissipating. The problems are myriad and considerable and will obviously need more than one month of COVID-curtailed-coaching to resolve.

However the media and fan culture in this country is such that without the green shoots of on-pitch progress, the manager will find himself under scrutiny very quickly. He has to find a way to get these players to deliver performances and results soon. But where does he even begin?

It’s become very clear, very quickly that Ole Gunnar Solskjaer hasn’t left the United first team squad in anywhere near the shape many had suggested. You could argue this group of players is as disjointed as at any stage since Sir Alex Ferguson’s departure.

There are players in the squad who have the ability but not the attitude. Players with the right mentality but without the required aptitude. Many who are happy to sit on huge salaries without game time. A handful of talented players acquired at great expense with no route to the first team. Most depressingly, despite significant expenditure in the last 3 years, there still seem to be numerous square pegs in round holes.

Unfortunately for Rangnick, he doesn’t have the luxury of multiple transfer windows to resolve this conundrum, to the extent that is required anyway. Wholesale changes would also not be palatable to a United board who are keeping their options very much open from a managerial perspective. Their argument would also be that Rangnicks remit was to come in and implement a structure for a disparate but talented collection of individuals to operate as a cohesive unit. The Janurary transfer should be taken advantage of and presents an opportunity to address key problem areas such as central midfield and right-back, which if hired into correctly could make a significant difference to the team.

If Rangnick is to succeed he must also use this window to cull a bloated squad. The likes of Martial, Lingard, Mata, Jones (despite is performance against wolves), Henderson, Pogba must be moved on quickly. All players who have no desire to be at the club or have no obvious prospects of breaking into/staying in the first XI.

The age old issue of ‘players fitting a formation’ or ‘formations fitting the available players’ is another problem Rangnick needs to resolve swiftly. Although he has not suggested that he is wedded to any particular formation, the 4-2-2-2 system is one he has used in the majority of games so far, at least as a starting point. Six games is not a large enough sample size to say that a formation isn’t working but there are clear defensive and offensive shortcomings as a result of its implementation.

When Rangnick was presented as manager he very articulately explained the basic premise of his philosophy was to control football matches, both in and out of possession. 4-2-2-2 with the personnel available so far does not appear to provide that control. There is no combination of two central midfielders available in the squad who can give the team the defensive cover, athleticism AND ball retention ability needed to make it succeed. The two No 10s behind the strikers have neither the football intelligence or athleticism to cover the amount of ground being asked of them. The centre forwards (barring Cavani) are penalty box poachers and without service from the wings largely become passengers.

Rangnick will be seeing this play out and it will be interesting to see how the team is set up in the FA Cup game against Aston Villa next week. Does he stick to his guns or does he revert to a more familiar 4-3-3 which is a much better fit for the players at his disposal.

If Rangnick is to succeed at United this is the area where he has to be brave and stamp his authority immediately. The problems highlighted above with regards to squad shape and the team system, it allows Rangnick to play means that it’s not merely going to be the most talented individuals that makes the most cohesive unit. One of the many reasons Solskjear was relieved of his duties was his insistence on shoe-horning big names into his match day XI at the expense of more fitting candidates, both in terms of form and natural position. E.g. Paul Pogba being played on the left of midfield.

In many ways Rangnick has nothing to lose given the short term nature of his role. He can confidently put a few noses out of joint with his selections and not face the ire of the fans, media or club hierarchy as ostensibly this is what he has been bought in to do. Some decisions would be easier to make than others of course. Replacing Wan Bissaka/Shaw for Dalot/Telles was well received and made sense given the consistently flawed performances of the two longer term incumbents. It’s unclear why Rangnick has gone back to AWB/Shaw in the last two games. The introduction of (the criminally underused) Donny Van de Beek also appears to be low hanging fruit which Rangnick should be picking off. A combination of DVB, Fred and Matic as a 3 in the centre of the pitch, although by no means a long term solution, would (a) provide greater control than any other 2-or-3 man midfield, both on the ball as well as sufficient legs to press when out of possession (b) provide full-back cover and allow the likes of Greenwood and Sancho to move forward into more natural wide attacking positions (c) allow the removal of the misfiring Bruno Fernandes from the side.

At centre back it would be hard for even Harry Maguire himself to contest his de-selection. You could comfortably argue that out of Varane, Bailly, Lindelof, Jones he is the least deserving of a starting place. The flaws in his game have been exposed consistently throughout his United career and become more profound since the start of this season. His position as club captain and the size of the fee paid for him should not mean he is undroppable. In fact it is counter intuitive not to play someone like Bailly who (with Varane) provides a more mobile pairing centre back pairing, thus allowing for a much higher defensive line and smaller spaces between the lines for the team to close down.

The hardest selection decision of them all is of course around Cristiano Ronaldo.

Ronaldo is both a victim & part of the overall issue when it comes to this current United team. The quality of service into him is atrocious – XG stats across the season for United bear that out. It’s only through his supreme ability that he has managed to maintain his own incredible goal scoring stats. But in there lies the problem – it’s not just about Ronaldo. His assimilation into the team has changed the playing dynamic. Those around him try and find him even when there are more obvious/simpler passes to play. The number of basic unforced errors and giveaways in games this season has been mind blowing. This is by no means down to Ronaldo’s presence alone, but there is a more rushed nature to United’s play.

The problem then becomes cyclical in nature, i.e. the less service available to Ronaldo the more redundant he becomes in terms of his contribution to the team, the more frustrated he becomes and the growing lack of togetherness being seen on the pitch becomes more prevalent. It’s also the one area of the pitch where United have top quality alternatives with the more team oriented Cavani and the younger, more malleable Mason Greenwood able to slot in comfortably. Rangnick has to be strong and drop the great man.

It remains to be seen whether Rangnick will take this opportunity by the scruff of the neck. He was brought into the club as an ‘Ole Antidote’. Someone with footballing experience, intelligence and gravitas who could come in, identify problems and implement solutions swiftly and methodically. He does have a strong hand to play. As mentioned the short terms nature of his role should embolden him to make changes. The transfer window is open and couple of smart moves, especially in midfield (Bissouma, Tielemens etc.) could transform the dynamic of this team very quickly.

The fans’ positivity may have subsided around his appointment but they largely remain sympathetic to his cause and appreciate there are significant issues that need resolving. Their focus is also very much on the players who have repeatedly underperformed under several managers and are already beginning to leak the same ‘anyone but me’ noises to the press. Additionally the fixture list up until March remains kind, although such are the level of performances being churned out by united there really are no games that can be considered gimmies. There is time to turn things around and finishing in the top four not impossibility. As a United fan we can only hope!