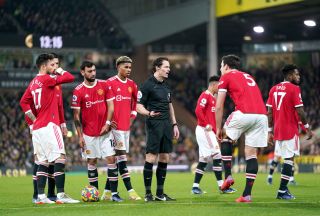 Manchester United’s trip to Brentford has been rearranged for January 19, with an 8pm GMT kick-off.

The match had to be rescheduled following the recent flurry of COVID-19-related postponements.

BT Sport will be televising the match and it will be United’s first trip to the Brentford Community Stadium.

It will also be our first competitive fixture with the newly promoted side since 1975, which ended a goalless draw at Griffin Park.

However, the Premier League still has 15 matches left to rearrange between now and the end of the season – in addition to other matches that may get postponed.

Manchester United vs Brighton has yet to be given a date or time, but the league will need time to rejig their calendar to make sure it doesn’t clash with other competitions.

Other matches that need rescheduling include: