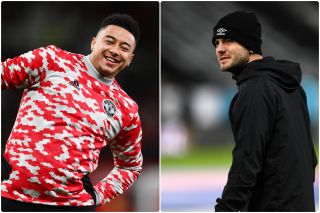 The England international knows a thing or two about downgrading – after transferring from Arsenal to West Ham in 2018 – and he has given his word of advice to Lingard.

According to the Daily Mail in November 2021, Lingard had already made his decision to quit Old Trafford.

Wilshere has said that Lingard should be careful with his next move because “the grass ain’t always greener” on the other side, plus he thinks the midfielder should count himself lucky to be at a team like United.

He told talkSPORT: “I think after the six months he had at West Ham, he probably thought he was going to get a chance at United. He probably deserved a chance.

“The grass ain’t always greener. I had this a few times at Arsenal with players who didn’t want to be there.

“All right, they’re not challenging but it’s still a big club and teams go there and are intimidated by that. To be on that side of the fence rather than going to them places makes a massive difference.”

Wilshere speaks from experience. The former Bournemouth midfielder is currently a free agent.

Lingard can leave United on a Bosman in the summer and is currently linked with a move to both Newcastle United and West Ham, where he enjoyed an excellent loan spell during the second half of last season.

Under Ole Gunnar Solskjaer, Lingard’s game time was lessened over time and he didn’t play much before joining West Ham on loan. That move rejuvenated his career and I can see why he’d like to go back there.

It would help get him on the plane for the World Cup later this season. Of course, Lingard missed out on a place for Euro 2020, but another goal second half of the season could see him in with a chance again – granted he gets a move this month.