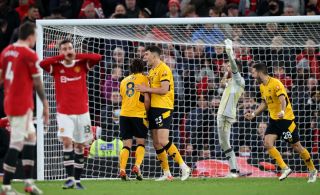 Former Manchester United midfielder Luke Chadwick has given his analysis following the 1-0 defeat to Wolves on Monday night.

The performance was way below par and now it’s difficult to see how United can go on a winning run this season while playing with such inconsistency.

Chadwick expressed his sheer disappointment at the result in an exclusive interview with Caught Offside, who probably let him speak his mind more than MUTV did on Monday night…

“It was a real damp squib,” Chadwick told Caught Offside. “There was a real hope after the Burnley game, when we were really on the front foot and positive. A new year, a fresh start, but it was a real disappointment in terms of the performance.

“There was no energy, no real attacking intent, and Wolves were without a doubt the better team throughout the game and deserved the win.

“It was another case of one step forward, two steps back. It was a bit different from against Burnley, when Sancho was a bit wider, McTominay got forward well, and it looked like a nice balance. It was the same team against the Wolves game but it was like night and day really, there wasn’t the energy to get into the box or create chances and it was a really disappointing start to the year.

“We didn’t seem as narrow against Burnley, Sancho got into really good positions, Shaw got forward well. Against Wolves there was no dynamic movement, though their shape was good and they dropped a bit deeper, really frustrating United, who just ran out of ideas in the end. Not many of the players are at the top of their game at the moment.”

It’s important to note that this was Rangnick’s first defeat as United manager, but it was one that felt like it was coming for some time and now the interim manager is attracting criticism.

You would hope he can find a way to deal with it between now and the end of the season. Otherwise, our season has ended prematurely again, without anything to show for it.

United can’t afford to crash out of the FA Cup next Monday when they take on Aston Villa. I think that would be enough reason to call the current situation a crisis.

Chadwick was also asked whether United should’ve gone for a proven winner like Antonio Conte, who was available not long before being hired by Tottenham Hotspur.

The former youth team graduate insisted it was too early to say.

“It’s way too early to say that Conte would’ve been the better option,” Chadwick said.

“Rangnick’s come in and this was his first defeat against Wolves, he can’t turn things around that quickly in terms of getting the team to play his way.

“What Rangnick talks about, he wants his teams playing a certain way and always wants high energy from his players, and at the moment United look anything but that. It seemed like the Burnley game might be a turning point with a really energetic attacking display, but against Wolves it was really dour.”