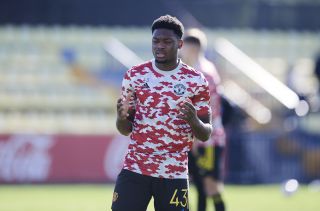 Teden Mengi is closing in on a loan transfer to Birmingham City, according to reports.

The 19-year-old defender impressed at Derby County last year but his spell under Wayne Rooney was cut short due to injuries.

But after making his first senior appearance for the Reds in the Champions League against Young Boys, it looks like Mengi will be getting regularly game time for the remainder of the season when he completes his move to Birmingham.

According to the Daily Mail, Mengi is on the verge of completing a temporary switch to St. Andrew’s.

This comes after manager Lee Bowyer was handed a setback when loanee centre-back Dion Sanderson was recalled by Wolves.

Birmingham are currently 18th in the Championship so they need a big second half to the season to keep their survival hopes alive.

We just want to see the youngster get more minutes under his belt — whether it’s in the Championship or abroad — because he’s got too much talent not to be playing football.

Mengi is certainly one for the future.