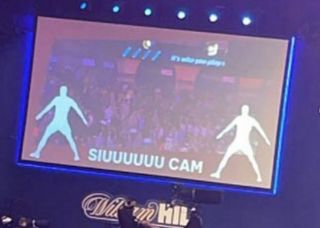 Darts fans have been split over the use of a ‘Siuuu cam’ at the 2022 PDC World Darts Championship.

The whole idea is for spectators at Alexandra Palace to emulate the famous celebration of Cristiano Ronaldo, even though the Portuguese attacker has never shown an interest in darts, and some gave it a go while others felt it was cringeworthy.

Ronaldo’s celebration, which dates back to his days at Real Madrid, has been copied this season by Jesse Lingard too.

The new addition comes in the style of a ‘kiss cam’ that can be seen across several sports in the United States.

Daryl Gurney and Ricky Evans joining in the fun at Ally Pally!

Peter Wright put his name alongside some of the greats of the game by winning his second PDC World Championship last night.

There was no ‘Siuuu’ celebration afterwards, but the Scot backed up his 2020 title with a 7-5 victory over Michael Smith in a tense final.