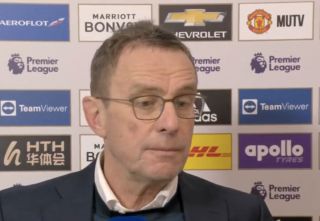 The Red Devils came into Monday’s Premier League match hopeful of securing a win that would have seen them rise from seventh place to level on points with David Moyes’ West Ham United in fifth.

However, despite naming a strong starting 11, including Cristiano Ronaldo acting as captain, the Red Devils failed to put on a show and ultimately fell to a 1-0 defeat following a late strike from midfielder Joao Moutinho.

Reacting to his side’s underwhelming performance, Rangnick, who spoke to Sky Sports after the match, bemoaned his player’s showing and was particularly critical of his backline’s defensive capabilities.