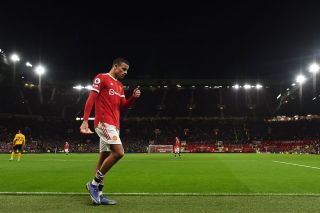 There was a subtle but angry reaction at Old Trafford when Ralf Rangnick decided to substitute Mason Greenwood against Wolves.

The youngster was taken off for Bruno Fernandes after putting in a positive display, offering something in the final third when other forward players seemed asleep, but there is no denying that his Portuguese replacement had an impact on the game for 10-15 minutes.

Fernandes even hit the crossbar but was unable to help United on a night they suffered a 1-0 defeat at home to Wolves.

Some fans at Old Trafford were heard booing when, on the hour mark, Greenwood came off for Fernandes.

“It was 0-0,” Rangnick told Sky Sports, as quoted by the Evening Standard. “We had our better moments in the part of the game so we decided to bring on Bruno. He had the big chance to put us 1-0 ahead.

“Mason was good but I had to take somebody off and didn’t want to take one of our [central midfielders] off. So the question was do I take off Edi [Cavani] or Mason. I decided to take off Mason.”

Although Rangnick stood by his decision even at full-time, the interim manager didn’t hide away from the fact United deserved very little from the game itself.

It was his first defeat as United manager but he took it on the chin.

Rangnick added: “We didn’t play well at all, neither individually nor collectively. In the first-half, we had big problems to keep them away from our box and from our goal.

“Second-half, we changed to a different formation with a back three and we had more control in the second half of the game, had then a spell of 15 minutes where we could have scored, hit the crossbar.

“But the goal that we conceded again showed… We had enough players in the box, but we allowed [Adama] Traore, back to goal, to turn and gain speed and bring in the cross.

“The cross had already been defended by Phil Jones, but again the goal that we conceded was one of too many this season where Moutinho could just shoot completely unmarked with no problems, no pressure at all and therefore we are very disappointed about the result, but also about parts of our performance.”

It’s important to note that the booing was particularly loud but you could definitely hear it.

Greenwood was giving United something different and running at Wolves players with the ball. I didn’t think it was the right call to haul him off, but Rangnick had to make a decision with Fernandes on the bench.

Spoilt for options but none of them were able to make a real difference as United lost 1-0.