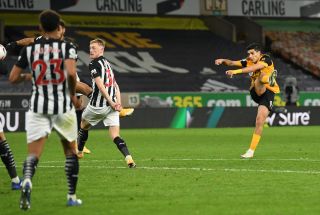 A convincing win for the Reds to kickstart 2022 would be the best way to get the past year beyond us.

What we want is not always what we get, so Manchester United will be made work for a win on Monday evening when Wolves come to Old Trafford.

Although the win over Burnley on Thursday night was a convincing one, it was also a performance that lacked compelling rhythm in the second half, and United will need to be better against eight placed Wolves.

It is well known that Wolves have struggled in front of goal, but I was appalled to discover pre-match that United have only scored more than once in two of our last eight matches. I fancy Cristiano Ronaldo to score the first goal!

Main man Raul Jimenez is back

Although this season has been a slow burn for the Wolves striker, it’s great to see him back playing football again after suffering a serious head injury last season. Jimenez remains their biggest threat in front of goal and United’s defenders will need to be at their best to keep the Mexican quiet. We’ve looked vulnerable at the back in recent weeks, too.

Wolves rarely win at Old Trafford (…in the league)

The last time Wolves won at Old Trafford in the league was in February 1980, which is a record Bruno Lage will want to break in his first season at the helm. Ralf Rangnick has more important matters to worry about, though.