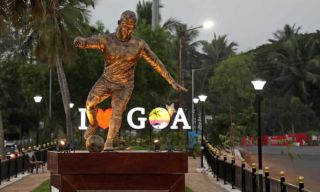 Some of the locals in Goa are unhappy with a statue of Cristiano Ronaldo being unveiled in their hometown of Calangute.

These people are accusing officials of insensitivity for honouring a footballer from the region’s former colonial power.

Angry protesters gathered with black flags at the site where the statue was unveiled this week in the town of Calangute.

Goa was granted independence from Portugal in 1961, whereas most of present-day India gained independence in 1947, so it’s not like Ronaldo or those involved meant anything bad by the gesture of unveiling a statue of the sports star, but I do have to ask what relevance it has with India or Goa?

It is believed to be a football town, more so than cricket, so that may help explain why they’ve made a statue of the GOAT.

Perhaps the protesters would’ve backed off if Ronaldo had showed up for the statue unveil – and request autographs or selfies with the Manchester United forward instead – but he’s too busy with the current season.

United also have a lot of fans in India, who I’m sure won’t let conflicts of yesterday get in the way of their love for the beautiful game, and visit the statue which was put in place to serve as a tourist attraction.

Michael Lobo, a local minister with India’s ruling Bharatiya Janata Party, told AFP the aim was to inspire young people to excel not just inside the country but across the world.

“All the boys and girls who want to make football a career will get inspired by people like Cristiano Ronaldo,” Lobo said, as quoted by Euronews.

“If you pursue your dream and you’re passionate about it then you can reach a higher goal. This is what we have written on the plaque.”