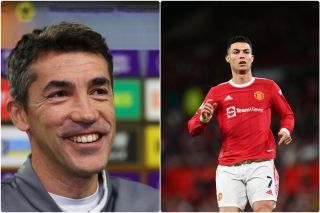 Cristiano Ronaldo has been offered a transfer to Wolves.

Of course, Jorge Mendes has already rubbished claims that Ronaldo is unhappy at United, and he made his return to the club his ultimate highlight of 2021 in a recent Instagram post.

The Wolves boss joked about the possibility of signing Ronaldo ahead of his side’s Premier League clash with the Reds on Monday night.

Lage took the opportunity to comment on Ronaldo ahead of the meeting, knowing his defenders will be trying to keep him quiet after scoring eight league goals in 16 appearances this season.

Ronaldo was among the players seen to press against Burnley, which goes some way to kill off claims that he wouldn’t work in a Ralf Rangnick-inspired team. A lot of the questions came after the disappointing 1-1 draw with Newcastle United, but that was a bad day and United have already bounced back from that.

Now it’s about making it two wins from two after taking three points off Burnley.

Lage added: “When you look for a player the most important thing is to see what he can give to your team. When you have a player like him who can score goals, it is hard to believe he is 36.

“He is a massive player, I think any team in the world would want a player like him.”