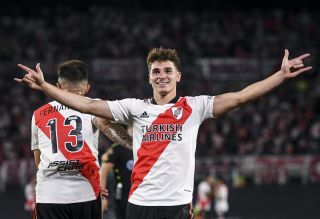 It seems things are accelerating on the Julian Alvarez front. Well, that’s if you believe everything you come across on Twitter.

A Portuguese insider named Pedro Almeida, who claims to have knowledge on dealings in the transfer market, has tweeted an update that is sure to excite the most gullible of fans.

Almeida does not claim to work for any outlet but he shares his information freely across social media.

While I wouldn’t jump at the claims just yet, until any of the bigger outlets hear anything, we’ll hear him out.

Apparently Julian Alvarez is on the verge of joining Manchester United, with the Reds set to pay his buyout clause.

Mauro #Icardi is set to join Juventus from PSG, six-months loan with buy option around 35M€. Juve pays 2.5M€ by the loan. Mauro is back to Serie A.⏳🇦🇷 #Juve #PSG

United will need to sign a goalscorer if they lose Edinson Cavani and Anthony Martial in the next year, and the 21-year-old Argentine could even be an upgrade on the latter.

It only makes sense with Cristiano Ronaldo being 36 and coming to the end of his career, while still allowing Mason Greenwood room to compete because he’s got a high ceiling.

United should be in the market for the best young players across all continents.

Alvarez has scored 26 goals with 17 assists for River Plate to cap off a brilliant 2021.