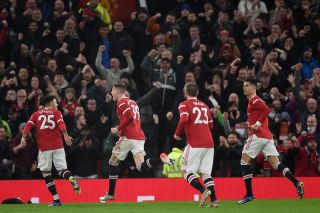 McTominay found himself in the right place at the right time when Cristiano Ronaldo took a heavy touch at the edge of the box, before swinging his foot at the ball which lofted into the back of the net as United beat Burnley 3-1.

The Scotland international was unlucky not to add another to his tally on the same night when Wayne Hennessey pulled off a fantastic save, only for the ball to drop perfectly for Ronaldo to tap home.

McTominay was man of the match for his overall display and it will go down as his best performance of the season. Hopefully he can build on that and we see even better in the coming months.

It was a man of the match performance from @mctominay10 🔥 #MUFC pic.twitter.com/fOPQPpqsrG

“I don’t think even last year he was one of United’s better players,” Ince told DAZN, as quoted by the Metro.

“I think with Fred because they’re kind of playing two holding you had Pogba, Fernandes and he wasn’t really allowed to venture forward and that was always the problem for Ole; whether he played one holding with two forward [or vice-versa].

“I think today you saw the experience of Matic who has played there all his career and knows that holding position role and that allows him to venture forward.

“You’ve got to do that as a Manchester United player, Scholesey did it, Keaney did it, Robson did it.

“People say he’s still young but he’s 25/26 now, he should know what type of player he wants to be. If he can add goals like he did today then he can be a very very good play for United.”