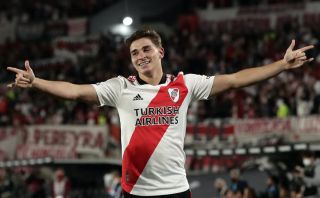 River Plate striker Julian Alvarez is being tipped to make a big transfer to Europe.

Manchester United’s alleged interest in signing the player was first reported a week ago.

It is no surprise that some of the biggest clubs around are said to be interested in signing Alvarez, who has scored 26 goals while registering 17 assists for River Plate in 2021.

If he is scoring that amount of goals in Argentina at 21-years-old, it may be worth considering a scouting trip or two, which I am sure United have already done with the constant transfer links.

This could mean United are willing to meet the player’s reported €20m release clause in his contract. That would put us clear of any competition for his signature, but this remains paper talk for now.

None of the mainstream media in the UK have tipped an accelerated interest in Alvarez, though you know we’ll be keeping track.