Apologies for the delay in this series entry of United through the ages. It’s been pretty hectic at home and also at work but all back on an even keel now. Lets continue…

The season 1895/96 wasn’t much better than their first season in the second division. The Heathens couldn’t adopt their style of playing to the second division. And by the end of the season they were a long way off the promotion places, they finished sixth with 15 wins and 12 defeats out of 30 games played.

In the FA cup they reached the second round, one round further than last year. 1895 was the year that Newton Heath changed their club’s colours. Till this time the club colours had been green and gold, but it now changed to white shirts and blue shorts. 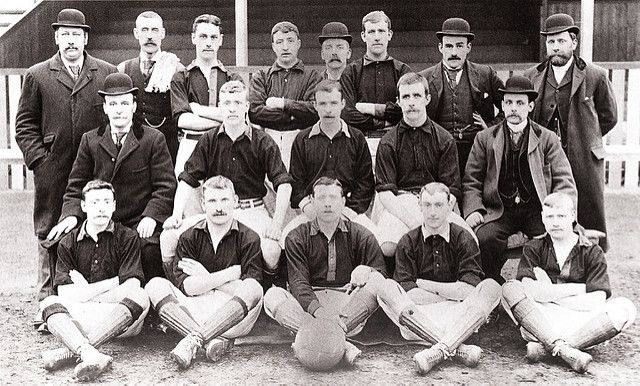 The 1895–96 season was Newton Heath’s fourth season in the Football League and their second in the Second Division. They finished sixth in the league, which was not enough to earn a chance for promotion back to the First Division. In the FA Cup, the Heathens were knocked out in the Second Round, losing 5–1 in a replay against Derby County after vanquishing Kettering Town in the First Round.

Caesar Augustus Jenkyns a new signing during the season (rare press clipping below) was born in Builth Wells, Wales on 24th August 1866. He played football for Walsall Swifts before joining Small Heath in 1892. In his first season he helped the club win the Second Division title. Jenkyns, a centre-half, scored 11 goals in 75 games before joining Woolwich Arsenal in 1895. The following season Jenkyns became the club’s first international player when he was selected to play for Wales against Scotland. After only playing 35 games for Woolwich Arsenal Jenkyns was transferred to Newton Heath in May 1896. Jenkyns won eight international caps for Wales. He also helped Newton Heath win promotion to the First Division of the Football League in 1898 after scoring 5 goals in 35 games. 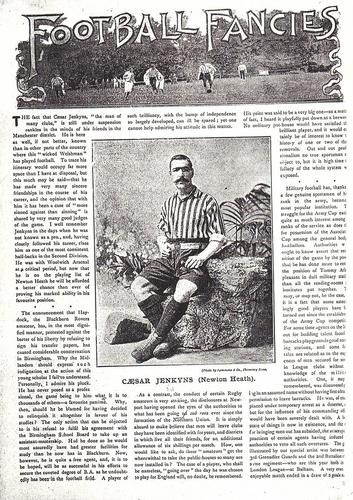 To give you an idea of match day at Bank Street, Clayton I have unearthed the photograph below. It is not great quality as you can imagine for the time. 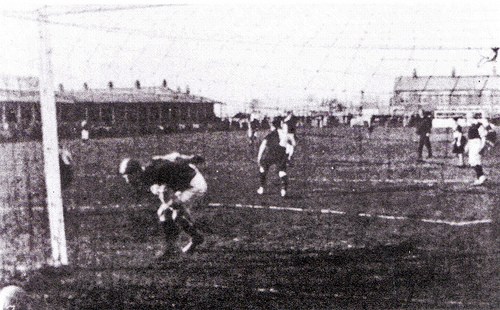