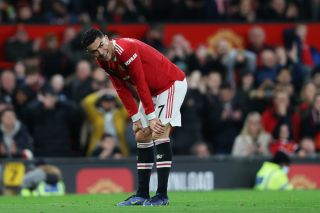 There has been a lot written about the sensational Portuguese midfielder of late, but it seems he’s staying put in Manchester for the foreseeable future.

Jorge Mendes said, as quoted by Romano on Twitter: “Cristiano Ronaldo is very happy at Man United. He’s gonna continue with his solid, great performances as always in his career. It’s going to be a great season for him, I’m sure.”

Jorge Mendes: “Cristiano Ronaldo is very happy at Man United. He’s gonna continue with his solid, great performances as always in his career. It’s gonna be a great season for him, I’m sure”, he told Sky Sport. 🔴 #MUFC pic.twitter.com/qDs8wWQuAt

Some pundits have suggested that the 36-year-old has cut a frustrated figure for large parts of his return to Old Trafford, but the player himself was dealt deserved criticism following his decision not to acknowledge supporters after recent matches at Norwich and Newcastle. It’s the very least a footballer is expected to do after a game.

Ralf Rangnick has already picked up on the body language from his players, although he didn’t agree with Gary Neville who said it was a glaring problem at St James’ Park.

Aside from that, I have thoroughly enjoyed having Ronaldo back at United and amongst the goals. A goal and assist last night against Burnley should silence critics for another few days, but they will be watching him against Wolves trying to weigh up their argument that he is a problem in the dressing room.

People will always make a big deal out of Cristiano Ronaldo.

He missed an absolute sitter in the first half against Burnley last night, but I was never in doubt that he would go on to rectify that miss.

I pity those who continue to doubt him.