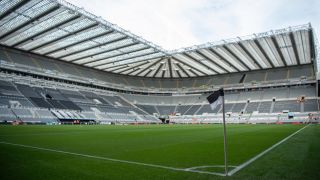 Manchester United will be looking to move within touching distance of the top four when they take on Newcastle United in the Premier League at St James’ Park on Monday night.

The Reds go into the game on the back of an extended break following a recent run of postponed games whilst the hosts were defeated 4-0 by Manchester City last weekend.

Raphael Varane could be set for a return to the starting eleven to face Newcastle having missed the past seven weeks through injury whilst duo Aaron Wan Bissaka and Edinson Cavani could also feature.

Having not played since December 11th against Norwich City, the Reds will be no doubt eager to get back on the pitch and in facing Newcastle it provides Rangnick a perfect opportunity to get the Reds back on track.

Newcastle have endured a dismal season thus far and currently find themselves loitering in the bottom three. A multi-million pound takeover may have lifted morale off the field but on the field it’s a very different story and this is a game the Reds should take all three points from.

Games away at St James’ Park are always lively affairs and I expect this encounter to be no different. These games have always had plenty of goals in them and with Ronaldo, Fernandes and co all expected to start, the Reds certainly have enough firepower to cause the Newcastle backline all sorts of problems.

It’s a game Manchester United should win and one which I think they will do albeit I think it will be a close affair.

One response to “Preview: Newcastle United vs Manchester United”